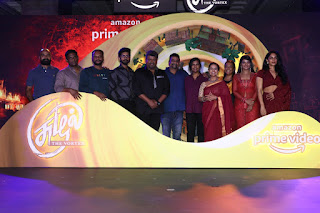 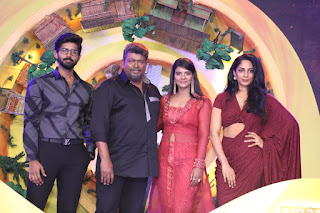 The Trailer and First Look of Amazon Prime’s 1st web series in Tamil-Suzhal- was released at a grand gala function held in a spectacular manner!

Releasing in nearly 30 languages wide across the length and breadth of the globe!

Shreya Reddy is appearing before the camera after a long gap of about a decade and a half!

Aiswarya Rajesh, Kathir and Shreya Reddy –all of whom having acted in the series,  were present on the occasion and spoke from the bottom of their hearts while addressing the huge gathering that had assembled.

Writer, Actor Director R.Parthiepan was also there and his speech was punctuated in his typical characteristic style!

The series is set to stream on Amazon Prime OTT Platform from the 17th of June, 2022.

Santhanabharathi, Prem and Nivetha Sathish were also present on the occasion.

Siddhanand Sriram and Aparna Prohith from Amazon Prime were also present there. Both of them explained about their involvement in the making of the web series.

Directorial duo-Pushkar and Gayatri, the one and only filmmaking couple in the entire Asia have bankrolled this project under their banner, Wall Watchers Films.

Brahma and M.Anucharan have jointly directed the film.

Sam C.S. has composed the music for this much awaited web series.