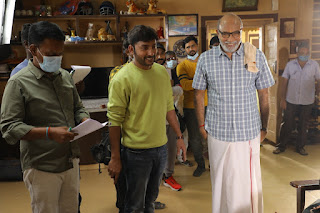 I can assure that Veetla Vishesham will be bringing back family audiences to theaters after a long time” – Actor Sathyaraj!

Actor Sathyaraj, one of the most-celebrated versatile actors in the Indian film industry is pretty excited about the release of his upcoming movie ‘Veetla Vishesham’ on June 17, 2022.

Actor Sathyaraj says, “Even before this remake could happen, I had already watched the movie Badai Ho and was impressed with the content, and the way, they presented it. However, when RJ Balaji approached me for the remake, my mind was blurred on whether I could pull it off efficiently. This is because, audiences have seen me in soft, rough, and tough roles, but not in such a character. It is when Balaji hinted to me to explore the ‘Paavam Moonji’ Sathyaraj (The innocent shade). He even referred to some of my hilarious scenes with Goundamani sir, where my character would behave like an innocent child. At the same, he wanted me to maintain the dignity of my character in En Bommakutty Ammavukku. When a director has such perfect clarity, it becomes an easy task for the actors. Significantly, this helped me a lot in performing this role. Moreover, Urvashi madam is such an outstanding artiste, and her performance is going to be lauded heavily in the theaters.”

When asked about the changes made in adapting to the tastes of Tamil audiences, he says, “I don’t think there’s a vast difference in cultural and relationship values across India. The family system is completely the same, and I didn’t feel any huge difference in portraying it. Yes, of course, RJ Balaji and his team have added certain factors that will make the audiences feel its best than the original version, which already, the producers have been appreciating. I can assure that Veetla Vishesham will be bringing back family audiences to theaters after a long time.”

Veetla Vishesham is produced by Zee Studios & Bayview Projects Boney Kapoor in association with Romeo Pictures Raahul. The film is directed by RJ Balaji-NJ Saravanan. RJ Balaji, Sathyaraj, Urvashi, Aparna Balamurali, VMC Lalitha, and many others are a part of this star cast.

Veetla Vishesham is all set for the worldwide theatrical release on June 17, 2022.