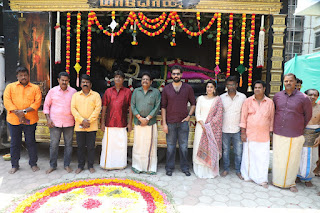 One of the much awaited films of the contemporary times is Maayon, which is supposedly about the connectivity of God and Science!

Produced y Double Meaning Production by Arunmozhi Manikkam, the film directed by N.Kishore has Sibi Sathyaraj and Tanya Ravichandran as an archaeologist and epigraphist respectively.

The film also incorporates a Puppet Show (Thol Paavai Koothu) into the script and the theme is set around some strange happenings in a faraway Vishnu temple!

Ilaiyaraja’s music is a salient feature of this flick, the First Look and Music Launch being held at a Private College.

Interestingly, the film’s Trailer was backed by a descriptive narrative which was enjoyed by the visually challenged children generating positice response from them!
A Ratha Yathra carrying an idol of Lord Vishnu also got flagged and is scheduled to tour different parts of the State in about 40 days!

The main cast and crew of the film consisting of Sibi Sathyaraj, Tanya Ravichandran, K.S.Ravikumar (who has played a vital role in the film) Arunmozhi Manikkam and N.Kishore also spoke on the occasion, coming up with individual points of views!