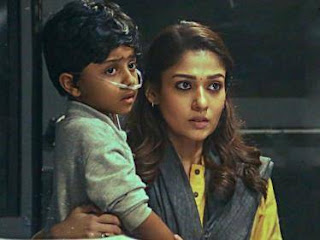 Written and Wielded by- GS Viknesh

Release on Disney plus Hotstar OTT

The cinematography of Tamizh A Azhagan and the absorbing background score of Vishal Chandrasekar stand out majestically in this nail-biting thriller laced with emotions and family sentiments which deliberates on a theme that is certain to draw the viewers to the edge of their seats!

Nayanthara has grown up both in stature and status over the years as far as her presence and performance on the screen are concerned and here she has come up with a breathtaking portrayal as a mother concerned showcasing extraordinary care and concern for her little son who has health issues.

He cannot breathe normally and has to be connected to a Oxygen Cylinder most of the time.

The mom and son take a trip on a private bus to Kerala on a night and as ill-luck would have it the bus gets involved in a freak accident owing to landslide and it is a question of life and death problems for all those who are caught up in the bus!

How the issue gets resolved is the rest presented in a pulse-pounding manner!

The character of the cop seems to showcase a cinematic trait and is less natural! Will anyone behave in such a crude and coldblooded manner especially in such a crisis situation!

Otherwise, the film is brilliant punctuated with tense moments!