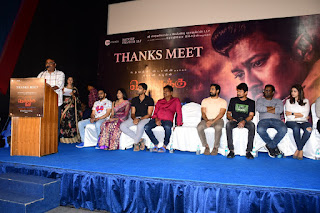 Bankrolled by ZEE STUDIOS & BAYVIEW PROJECTS & ROMEO PICTURES, the film, Nenjukku Neethi presented by Red Giant Movies has proved to be a stunning success story, both critically and commercially.

The film which is a Tamil remake of the Bollywood hit,  Article 15 featured Udhayanidhi Stalin and Tanya Ravichandran besides a busload of others that included Aari Arjunan, Ilavarasu, Suresh Chakravarthy, Mayilsamy etc.

Editor Ruben, Art Director Mevin, Ramesh Tilak, Yamini, Udhayanidhi Stalin, Arunraja Kamaraj, writer Thamizh and others spoke on the occasion, each one coming up with their observations and remarks as well as the efforts that had gone into the making of the movie.

The film showcased a sensitive theme in a sensitive manner appealing to the public at large for refraining from insisting upon on caste and creed on crucial issues at crucial times thereby causing heart burns to all those who get affected!

The screenplay offered suggestions to representatives of all castes appealing to all of them to avoid making decisions and statements degrading individuals on the basic of their caste!

Udhayanidhi Stalin delivered a heart moving speech and dedicated the movie to Arunraja Kamaraj’s wife who had passed away recently.

A timely gesture that is laudable!