MAYOON- A SPECIAL SHOW FOR THE VISUALLY CHALLENGED! 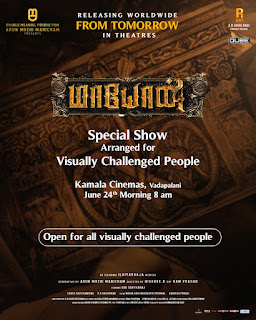 Mayoon, the much awaited and most awaited movie of the times is hitting the screens, tomorrow, Friday, 24th June 2022.

The theme blends Science and Spirituality in a very breathtaking manner.

The film’s Trailer and Tease have already created a very big flutter, raising the bar of expectations!

When the Teaser and Trailer were showcased for the Visually Challenged, an Audio Description accompanied them much to their delight.

An exclusive Special Show has been arranged for them at Kamala Cinemas, tomorrow.

A huge banner of Mahavishnu has been erected at Rohini Theatre.

It is worth noting Psycho was exclusively screened for them earlier.