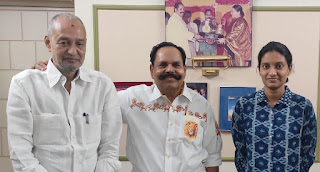 Thota Tharani is another famous person joining the Film GENTLEMAN2.

GENTLEMAN2 is produced by the Mega Producer K.T.Kunjumon. He announced that india's top notch technicians will team up for this project.He announced the director A.Gokul Krishna known for Nani's 'Aaha Kalyanam',Music Director as Bahubali and RRR fame Marakathamani (M.M.Keeravani), Cinematographer as Ajayan Vincent known for Ratchagan, Rudhramadevi,Dam999.

Now K.T.Kunjumon has announced Thota Tharani as the Art Director for the film.In this film Thota Tharani daughter Rohini Tharani is also working along with his father.He was the Art Director for blockbuster films like Nayagan,Thalapathy,Sivaji, Rudhramadevi,Gentleman,Kadhalan,Kadhal Desam,Ratchagan.Now he is working in 'Ponniyin Selvan' under the direction of Mani Ratnam.

K.T.Kunjumon is producing the film GENTLEMAN2 under his banner Gentleman Film International.The Heroines are announced as Nayanthara Chakravarthy and Priya Lal.Now everyone is waiting to know the Hero of the film.Everyone is excited to know who would be that lucky hero.K.T.Kunjumon said it will be revealed any time soon.