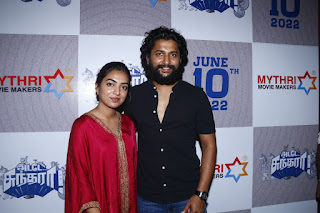 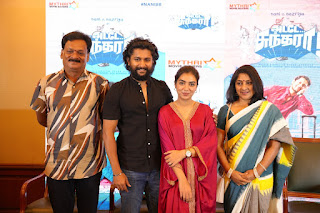 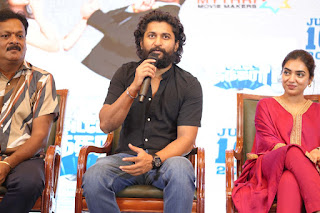 The Trailer of the forthcoming romantic family entertainer, Adada Sundara featuring Nani and Nazriya was released amidst a huge gathering of Media personalities and the main cast and crew of the film!

Besides the lead pair, Rohini and Azhagam Perumal both of whom being the main part of the main cast were also present on the occasion!

In his address, Nani mentioned that he was very happy to have been offered a light-hearted character after doing serious and action packed roles in the recent past. He also said that the film would stand out beyond geographical differences as it showcased a subject that has a far reach!

Nazriya observed cautiously that it had been quite a long while since spoke in Tamil and assured that the film will prove to be an enjoyable entertainer throughout!

Azhagam Perumal the erstwhile deputy of Manirathnam and also a filmmaker turned actor remarked that this is his first foray into Telugu films and that he was thankful to the production unit for having been so kind and cordial!

Rohini said that she had played the mother of Nani and that he treated her as though t is so in real life too!

She also mentioned that she is lucky to be getting good roles in her career!

Bankrolled by Mythiri Movie Makers, the film has been helmed by Vivek Athreya.