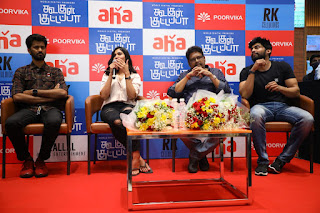 The above mentioned three have teamed up!

The customers of Poorvika are now tied up with Aaha Tamil!

A tie-up between Aaha OTT Platform has resulted in the customers of Poorvika by getting access to the OTT Platform after winning a competition floated by Poorvika!

This tie-up marks the association of films with brands the ultimate benefit of which reaches the customers, of course, on a fair and equitable basis!

It is a known fact that the film bankrolled by K.S.Ravikumar which was a remake of Android Kunjappan a Malayalam sci-fi comedy that streamed successfully on Amazon Prime OTT Platform.

It is more than a coincidence that the Tamil remake of that flick is streaming on Aaha Platform from June 3rd 2022!

Director K.S.Ravikumar and the film’s lead pair were present on an exclusive interactive session at the Poorvika outlet!

Sivakumar, General Secretary, Marketing was also present on the occasion.

New innovative trade practices that are highly beneficial to the customers stand unveiled!