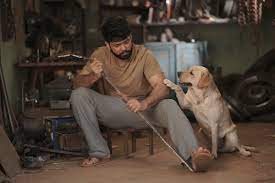 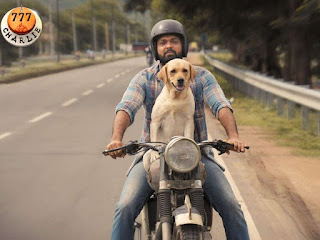 Written and Directed by- Kiranraj K.

Such films the theme of which focuses fully on a specific subject matter is a rarity these days and the film’s length that is lesser than close to 3 hours is no hindrance!

Rakshit Shetty who has played a pivotal role in backing the production has shed his action hero image and has come up with a truly marvellous performance showcasing the transformation from a man who is a moron to a guy who gets very intimate with his pet dog, Charlie who was formerly called Keaton.

Having lost his parents and sister, all at the same time in a car accident, he lives an isolated life while being employed gainfully in a factory.

The entire neighbourhood where he resides is afraid of him and they detest his very presence!
Undoubtedly, the film makes a great statement regarding human-dog relationship!

It also gives a clear cut message about pet adoption and how the society treats pets indifferently!

Dog is man’s best friend, it is said!

Here is a film to prove the point, that too, in a marvellous manner.

The dog is diagnosed with cancerous disease and the writing is on the wall that its days are numbered!

Finding out that Charlie’s desire in life to see snow, Dharma (Rakshit Shetty) sets out on a road trip to Shimla.

The film’s second half is an emotional ride in a bike with the both of them!

Bobby Simha excels as one another loner living with his pet dog!

The closing portions are heart moving!

A movie not to be missed, especially by those who rear pets, that too, dogs!.