THE POWER OF AN ELEPHANT! 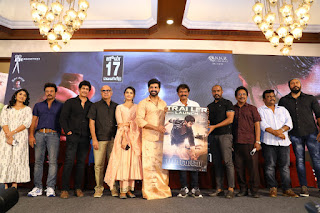 Elephants have extraordinary power which can be exhibited in an amazing manner whenever and wherever the situation warrants it!

Drumstick Productions’ Yaanai scheduled for release on the 17th of July 2022 is one among the much anticipated movies the Trailer of which was launched amidst an assembled crowd of Media Personalities, the main cast and crew of the film and other guests.

Anthony has edited the film the cinematography of which has been handled by Gopinath while G.V.Prakash Kumar has composed the music.

Ramachandra Raju of KGF fame has appeared as the film’s antagonist.

A noteworthy feature of the film is the breathtaking stunt sequences and especially a fight choreographed at one stretch for 3.30 minutes would stand out as the film’s USP, it was mentioned!

Hari who is known for his action films with Vikram, Vishal, Suriya etc has assumed responsibility for the film’s story, screenplay, dialogue and direction.

One of the salient features of almost all the films of Hari is the pace at which he will move the sequences in a rapid manner loading it with, blink and you lose the continuity kind of sequences!

The film’s content not only packs a punch but is also rich in sentiments and emotions, we infer.