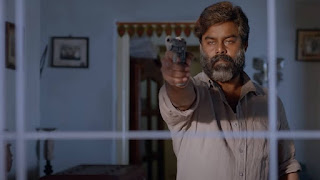 A remake of Joju George’s Malayalam film, Joseph, this is a reasonably well crafted thriller sans any commercial distractions strictly connected to the main theme right from the moment go!

R.K.Suresh (who has also released the movie through his home banner, Studio 9) plays the protagonist (Maayan) to tailor made perfection, depicting the character of an ex-cop, an alcoholic and a chain smoker, who is brooding over the death of his dear daughter, Diana (Madhu Shalini) and Stella, his wife after having parted ways earlier!

The coincidences in both the deaths initiate the cop-mind in him and he begins to probe further, deeper!

What is unearths is a shocking revelation of crimes committed by a medical mafia gang that deals with the trafficking of human organs!

Maayan exposes the racket but for a very costly price!

The narration is effective with never a dull moment and without any distractions which is mention worthy.

R.K.Suresh’s best performance so far and he has made his mentor (Director Bala) proud.

The background score of G.V.Prakash helps to maintain the tempo.

It is hard to accept Bhagavathi Perumal in the role of Peter as he maintains a confused look throughout!

Poorna creates a flutter but her character appears to have been underwritten; more so, the reason for her parting with Maayan is not convincing while her re-marriage with Peter looks all the more unconvincing!

The overlapping scenes where the deaths of Stella and Diana are showcased causes some confusion, maybe, the editing should have been a bit tighter in these portions!

Yet, a gripping investigative thriller that is certainly engaging.