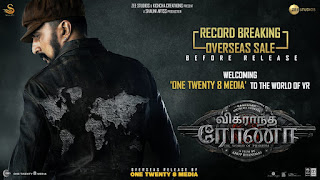 Kichcha Sudeep’s 'Vikrant Rona’ receives a whopping amount from the International distributors, A RECORD BREAKER FOR OVERSEAS DISTRIBUTION A highly anticipated film of the season, Kichcha Sudeep’s 'Vikrant Rona’ directed by Anup Bhandari has made a fabulous mark on the minds of the audience much before its release. The makers of the film keep on coming up with ideas to elevate the audience's excitement for the film which also signifies that the film is going to bring something big with its release on July 28. Since the teaser of 'Vikrant Rona' has been released, it is the trendiest thing on the internet that has accelerated the curiosity of the audience to the next level. The 3D Mystery thriller is going to bring a new world to the movie lovers with its amazing VFX and storyline and to expand the experience of the film to reach out to a larger audience the film has now received a huge amount from the International market. The overseas market distribution has been acquired by ‘One Twenty 8 media’. It is for the first time for a Kannada film that it has received such a huge price much before its release. Now it would be exciting to see, how the film is going to create wonders at the box office after its release. When asked the Producer Jack Manjunath, he said  ‘I’ve always maintained that the content of the film is universal. The emotions will hit the right chord across the world and this deal is a testament to it. Extremely happy about the purchase will announce the remaining details at the earliest’. ‘It is the highest for a Kannada film and on par with the other South Indian Languages”, he added. ‘Vikrant Rona’ will release worldwide in 3D on July 28th, starring Kichcha Sudeepa, directed by Anup Bhandari, also starring Jacqueline Fernandez, Nirup Bhandari, and Neetha Ashok, is presented by Zee Studios, produced by Jack Manjunath under his production Shalini Artss, and co-produced by Alankar Pandian of Invenio Origins.