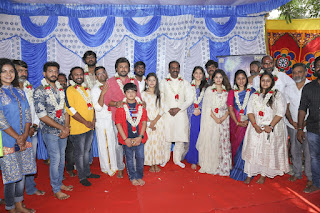 National Award winning actor who has carved a niche for himself on the merit of his spontaneity even while depicting characters of complexity has set off with his next project that got kick-started with a formal Pooja. Titled Thadai Udai, the project’s muhurat was held on a lavish scale in the presence of Vairamuthu and Shibu Thameens. Debutante filmmaker, N.S.Rakesh is helming the project. Misha Narang is playing the film’s female lead opposite Simha.

This big budget project will commence its shoot schedules from May 5th 2022.

Demal Xavier Edwards is the cinematographer.

Vairamuthu is compiling the lyrics.

Ganesh is the stunt choreographer.

The film’s title has already paved way for a lot of expectations.