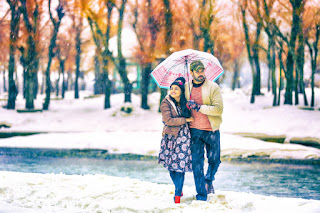 The snow capped locales of Manali stand out as the USP of this action packed thriller, the theme of which is set round the life of a youth who suffers from Alien Hand Syndrome which would initiate unsolicited movements of a hand causing commotion all around for the self as well as for those human beings around as well for things around.

Sibiraj does well as the young man affected by that but the health condition reminds the viewers of Peechankai (2017) which sported a similar setback in the life of its protagonist!

The title does remind the viewers of a Rajnikanth film of the same name that hit the screens in 1982!
Nikila Vimal as his pair looks good but somehow she doesn’t fit appropriately into the proceedings.

The initial portions of light-hearted scenes, involving Manobala, Sathish and Shiva Shara, in the pretext of comedy has a dismal effect.

The film takes off the moment the newly wedded couple reach Manali on their honeymoon trip wherein they check in at a hotel that exploits the private moments of the couple who come in!

Mohnish Raheja is the debutante villain who fails to create a flutter maybe because of his lack of the much needed expressions.

The climax sequences look prolonged yet draw the viewers to the edge of their seats!

Take a look to view the awesome snow-filled landscapes!