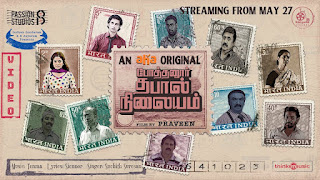 Content driven movies are always lapped up with both the hands at Kollywood, both by the critics as well as the viewers at large.

This meritorious film bankrolled by Sudhan Sundaram and G.Jayaram of Passion Studios that is streaming successfully on Aaha OTT Platform is a refreshing change from the formulaic films that we generally get to see on the screen as well as on the OTT arena which is a breathtaking thriller, not in terms of physical action (which is also there, but!) but in terms of the plot-strength, supported ably by the cast all of who have recorded a riveting performance but in a natural way!

The characters showcased in the film are so down to earth, most of which we happen to come across in our day to day lives on a regular basis.

The theme is about a closely knit family consisting of the head of the family who heads the local post office, his wife, a homemaker, their son, a well qualified youth and a school-going daughter who aspires to take up medicine.

The setting is in the nineties and director Praveen who has also played the lead role has taken meticulous care to ensure the period look right through the proceedings. For instance, the post office building, their house, the other houses in the neighbourhood, all of which painted with a coat of calcium and not Distemper, the Mercedes Benz model of the times, the dressing style, mannerisms, so on and so forth!

A heist takes place at the Post Office and the Headman’s intervention to safeguard the money in the cash chest goes haywire and all hell breaks loose!

Finally, the case gets solved but the whereabouts of the stolen money remains a mystery!

The suggested subsequent parts are indicative of the efforts, to be invested in solving that mystery!

Notwithstanding the fact that some scenes as well as performances of the cast appear a bit dramatic at places, giving the audience a feel of watching a drama but the overall effect is certainly satisfactory!

Curious to see the successive parts and know the modus operandi using which the mystery gets solved!

A miss not film that fits into the genre of an as an investigative thriller!