A remake of Anubhav Sinha’s 2019 film, Article 15 (which prohibits discrimination on grounds of religion, race, caste, sex or birthplace) that had   Ayushmann Khurrana as the protagonist hailing from an upper caste who takes up the cause of caste based inequalities and crusades for the sake of lower castes who suffer severely owing to caste based discrimination especially in rural belts.

As Udhayanidhi Stalin reprises Ayushmann’s role here, maybe with a view to play it safe, the filmmaker has showcased his character as one who doesn’t fit into the classification or categorization of belonging to a particular caste!

As far as Udhayanidhi Stalin is concerned, it is indeed a milestone film in his brief stint as a hero, doing either romantic or light-hearted roles most of the time! Had he emoted a bit more, it would been more delightful to watch him go about his powerfully etched our character to a better degree!

But his back story -a foreign educated youth returning home to take over as an Assistant Superintendent of Police –is less convincing as also his ‘connect’ with Tanya Ravichandran as a gender-equality activist!

While the backdrop setting in the Hindi original was in a fictional village in U.P., here it is set in a village in Pollachi where caste discrimination is prevalent!

Aari Arjunan’s character as Kumaran, a revolutionary who stiffly opposes caste-based discrimination but it is definitely underwritten, probably not wanting the viewers to draw parallels with that of the protagonist’s!

The creation of the character of Suresh Chakravarthy as the caste-conscious Circle Inspector seems to hold some agenda underneath! He speaks in normal dialect and accent under normal circumstances but whenever he has to mouth words that are not in the line of his duty, he speaks with an accent in a dialect that is characteristic of the community that he is supposed to represent in the film!

Three young girls in their teens go missing, with two of them found hanging, out in the public while the whereabouts of the third one remaining a mystery but the matter is projected as though it is a routine case! There is pressure from the higher-ups to close the case but ASP Vijayaraghavan (Udhayanidhi Stalin) doesn’t get bogged down by all that and decided to dig deep even if it means a suspension from duty following inference from the CBI!

How the truth comes to surface and the culprits are brought before the book accounts for the predictable balance of narration.

Needless to mention, the title has evidently been borrowed from the autobiography of the Late Sri. M.Karunanidhi.

Sample this – ‘If all are equal, then who will be King?’

‘The one who thinks all are equal!’

Yet another scene demanding definite mention is when the protagonist surrounded by his cop-colleagues, discusses and deliberates on caste based classification of human beings paving way for discrimination!

A though provoking investigative drama that is certainly worth a watch leaving behind  some points to ponder! 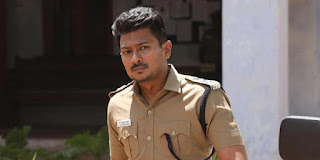