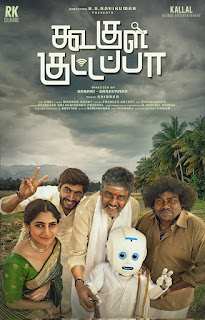 A remake of Android Kunjappan Ver 5.25, (Malayalam, 2019) which was highly successful rural sci-fi laced with humour, this Tamil version focuses on the acting prowess of filmmaker turned actor, K.S.Ravikumar (who usually makes it a point to appear in a cameo in his directorial ventures!) who reprises the character enacted brilliantly by Suraj Venjaramood. KSR has modified it to suit his stature and convenience emerging effectively as a widower with mood swings.

Soubin  Sahir’s role has been taken up by Tharshan without much of an impact. Losliya playing his pair has nothing much to do in the proceedings that focus on the bondage between an elderly widower and his caretaker, a robot!

The directorial duo, Sabari and Saravanan have ceremoniously followed the original, of course, with some changes felt suitable for the Tamil audience.

KSR comes good more in the second half of the film than in the first half and is impressive with his foot work too in a song and dance routine, clad in formal costumes.

Yogi Babu ridicules others and gets ridiculed by others, without any impact.

Prankster Rahul irritates whenever he appears.

A faithful remake that could be enjoyed by the family.