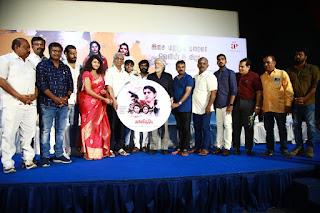 Kanni Theevu is a story strip that appears in Daily Thanthi since long!

Even who have passed middle age would have read that since their young days when their family elders would have been reading it!

Kanni Theevu is the title of this forthcoming flick which has already paved way for a lot of expectations, being a female-centric film which has female leads in action!

Rajan, Actor/Producer/Director Thiayagarajan, R.K. Suresh and very many film personalities including the main cast and crew were present on the occasion.

Sundar Balu has produced and directed this flick the Trailer and Music Launch took place in a lavish manner.

Perarasu, Sanjay Lalawani and Vijayamurali were also present on the occasion.

Both the Trailer and Songs were quite impressive.

Composer Raj Pratap’s tunes as well as the background score initiated curiosity to watch the movie.

I have put in extra efforts to come up with a good content and my team has worked very hard to ensure that the film is quite entertaining and enjoyable, remarked Sundar Balu.