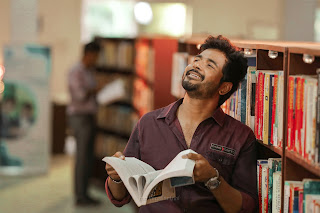 Going   by the title, not let this be assumed as the Tamil counterpart of Don (Hindi) that had Amitabh Bachchan and Zeenat Amman as the lead pair!

This is a fun-filled entertainer the screenplay of which has been fixated in an engineering college where the film’s protoganist, Sivakarthikeyan is hailed by a pet name-DON!

In his usual inimitable style, Sivakarthikeyan scores brilliantly in delivering one-liners, romancing the heroine, pulling the leg of not only his colleagues but also a management staff who is in charge for the disciplinary proceedings at the campus.

It is an oft repeated role for S.J.Surya, who has depicted such characters with shades; here again, he sleep walks through the role, effortlessly!

Sivaangi Krishnakumar as a fresher at college tries to be humorous through her expressions and body-language!

Samudrakani as the strict dad of Sivakarthikeyan looks too rigid without a convincing reason.

The film offers a lesson or two for parents as to understand the aspiration of their with respect to identifying their own goals and objectives; also for children to understand about the efforts put in by their parents while bringing them up! There is also a message for the administration of college authorities in imposing strictures for students in the pretext of upholding discipline!

Had the film’s length had been pruned a bit the film would have been a lot more enjoyable!