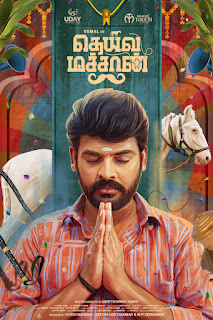 Actor Vemal acclaimed as the content-driven actor of Tamil cinema has a promising lineup of movies and has got the title and first look of his new project revealed. The movie titled ‘Deiva Machan’ had the first look revealed by ‘Makkal Selvan’ actor Vijay Sethupathi on his social media page.

Deiva Machan is directed by Martin Nirmal Kumar that features Vemal as the protagonist, and newcomer Neha as the female lead character. Besides, the movie has an interesting league of actors like Pandiyarajan, ‘Aadukalam’ Naren, Bala Saravanan, Muruganantham, Vathsan Veeramani, Vela Ramamoorthy, Thangadurai, Deepa, Bigg Boss Anitha Sampath, and many prominent actors.

Screenplay by Martin Nirmal kumar and Vathsan Veeramani, Camil J Alex is handling cinematography. Godwin is composing music. Ajeesh takes care of the background score, and Ilayaraja is the editor. The movie, set against the rural backdrops interwoven with fantasy elements is produced at a whopping budget by Udaya Kumar & Geetha Udaya Kumar of Uday Productions in association with M.P. Veeramani of Magic Touch Pictures.

Sharing the intriguing traits of the movie, director Martin Nirmal Kumar says, “The film is set against the village backdrops interwoven with fantasy elements and family relationships. Since comedy is the core element, we are confident that audiences will have an enjoyable experience, watching this movie.”

Following his spellbinding performance in the ‘Vilangu’ web series, actor Vemal has garnered a groovy response for the first look of ‘Deiva Machan’ among the audiences. Specifically, Vemal’s charismatic appearance in the first look is appreciated by Netizens, which has captured the interest of the public glare.