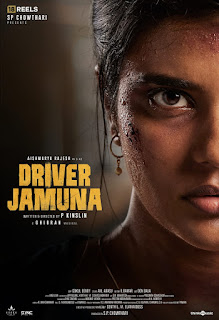 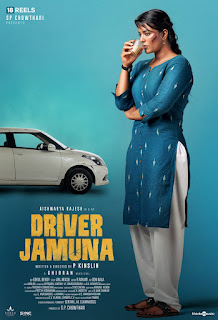 Actress Aishwarya Rajesh keeps enthralling the audiences with her stellar performances in unique roles. And here she is back to prove her acting prowess in the new movie titled ‘Driver Jamuna’ featuring her as the lead character, which has got its first look unveiled now.

‘Vathikuchi’ fame filmmaker P. Kinslin is directing this movie that features Aishwarya Rajesh as the protagonist. The others in the star cast include Aadukalam Naren, Sri Ranjani, ‘Stand Up Comedian’ Abhishek, ‘Raja Rani’ movie fame Pandian, Kavitha Bharathi, Pandi, Manikandan, Rajesh, and many others. Gokul Benoy (Cinematography), Ghibran (Music), Don Bala (Art) & R Ramar (Editor) are the main technicians. Since ‘Driver Jamuna’ is an out-and-out Road movie, it significantly demands top-notch sound factors, and hence, the makers have roped in the best sound design company ‘Sync Cinema’ to handle it. The movie is produced at a whopping budget by a famous pediatrician and top-league producer S.P. Choudhary of 18 Reels.

Director Kinslin says, “Currently, we witness many women working as call taxi drivers. Driver Jamuna revolves around the dramatic events that happen on the day of a woman cab driver.  Aishwarya Rajesh has prepared for this role in an effective manner by interacting with several female cab drivers and observing their body language and mannerisms to adapt to this character. Usually, road-based movies are shot using the Blue Matte technology. In contrast, Aishwarya Rajesh has performed every single shot without using any dupes and drove the car across the roads to give a realistic approach to her character in this movie. Her ability to focus on the road while driving, and at the same time, perfectly render dialogues with her co-stars surprised everyone on the sets. Although the character is challenging, she has nourished it intensely with her brilliant performance.”

While the major works have already been completed, ‘Driver Jamuna’ has reached the final stage now. During this juncture, the team has revealed the first look of this movie. Apart from Tamil, ‘Driver Jamuna’ will be released in other South Indian languages like Telugu, Malayalam, and Kannada as well.

The appearance of Aishwarya Rajesh in the First Look has garnered a commendable response from the Netizens.