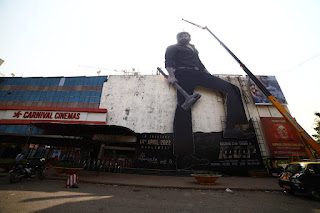 KGF Chapter 2 is one of the most awaited movies of the season bankrolled by Hombale Films and directed by Prasanth Neel.

Yash who stole the thunder with KGF stages a dramatic comeback with this sequel which is multiple times bigger than the previous project that kept the box-office bells ringing for long!

A 100 feet cut out for Yash has been erected at Carnival Cinemas at Mumbai as the film is releasing in Hindi as well.

The fact that Sanjay Dutt and Raveena Tandon are playing crucial characters in the film is an added attraction for the film releasing at Bollywood.

It is worth noting this is the first time that such a huge cut out has been erected there!

Dream Warrior Pictures releases the film all over Tamilnadu.