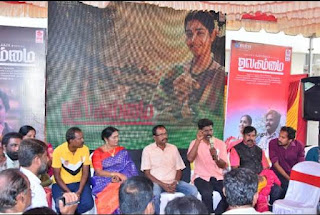 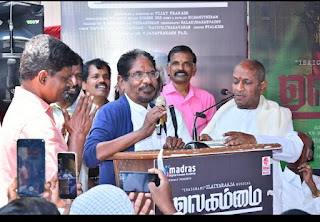 Films the themes of which are set around the lives of people in a particular neighbourhood have the tendency to catch up with the imagination of the viewers in a very effective manner!

Ulagammai, a forthcoming flick the screenplay of which has been set against the backdrop of Thirunelveli is one such flick which has been helmed by Vijay Prakash.

Maestro Ilaiyaraja has composed the music for the film the release of which was held at his recording studios recently.

Sadhi Sanam and Kadhal F.M. have already made by this filmmaker who has bankrolled the project under the banner, Madras Digital Cinema Academy.

The film’s screenplay is set in the seventies. Gowri Kishen and Vetri Mithran play the lead roles.

Professor Gubendran has penned the dialogue.

Actor Marimuthu has appeared in a pivotal role.

It is worth noting that Vijay Prakash has apprenticed under Bharathiraja.