THE RETURN OF THE VETERAN! 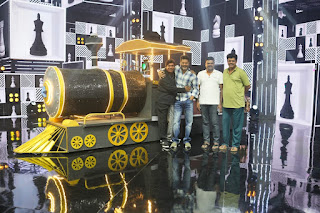 Hailed as Vaigai Puyal, Vadivelu is one among the top notch comedians of Kollywood who carved a niche for himself on the merit of his abundant talent that was always punctuated with a native flavour!

Nai Sekar Returns marks his dramatic comeback on a big scale, the project backed by Lyca Productions. Siraj is helming the project that is fast nearing completion.

Dancing darling Prabhu Deva and Vadivelu have scorched the screens together earlier and now, the duo is appearing in a song sequence in this flick!

It is worth noting that they both had teamed up last 14 years ago in Vijay’s Villu!

A huge set has been erected at Prasad Studios to can a song and dance sequence, choreographed by Prabhu Deva.

GKM Thamizhkumaran from Lyca Productions is supervising the entire proceedings happening at a brisk pace!

News and details about the announcement of the film’s First Look and Trailer are awaited!

Santhosh Narayanan is the composer.