SIDDY –A MUCH AWAITED CRIME THRILLER! 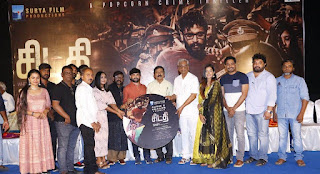 Bankrolled by Surya Film Productions and directed by Pious Raj, Siddy is a forthcoming crime thriller in which Aji John plays the protagonist. Akshaya Udhayakumar and Haritha play the female leads in this much awaited flick the Music Release of which was held on a lavish scale with well known film personalities in attendance!

A law college student turns a killer owing to the force of circumstances and the screenplay deliberates as to how and why he got involved in such a crime and the reasons he was dragged into such a crime scene forms the base of the narration which also reveals ultimately whether he is able is wriggle out of the complicated situation or not!

The Trailer showcased some riveting action while the songs were pleasant to the ears!

Each of the speakers from the production side spoke about the untiring and unnerving efforts that went into the making of the film while the special guests laid focus on recording their appreciation for the outcome of the efforts put in by the team as a whole.

The film is awaiting an early release in both Tamil and Malayalam.

A crime thriller worth waiting for as evidenced by the Trailer!