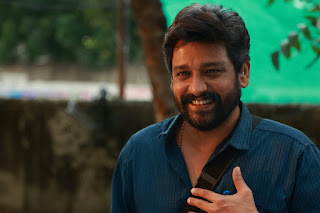 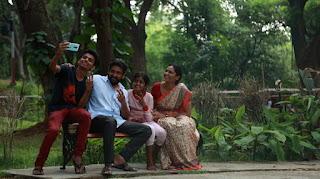 That Vidaarth is a versatile actor is beyond any debate! Especially when it comes to portraying challenging characters, he usually comes up with his best and here again, he emerges triumphant!

As a speech-impaired family man (Ezhilan) whose wife too is one like him while their daughter and son are both studious, Vidaarth takes his performance to the level in his career transporting the viewers along, firmly!

Karunakaran depicts a down to earth character –a contemporary youth, Anthony, who breathes social media, in and out!

On an occasion, Anthony happens to catch Ezhilan sleeping sound fully stretched in a Metro Train who posts in the social media presenting Ezhilan as a drunkard!
All hell breaks loose as Ezhilan gets lashed by very many active members of the social media!

Even his son, who is an aspiring sportsman, misunderstands him!
How the issue gets sorted out is the medium paced rest presented through a moving climax at the airport with Raaja Narayanan (Premkumar) enacting his part in an effective manner.

The film lags at some portions but overall communicates a strong message to all those who take social media lightly and play around!

The film is certainly worth a watch.