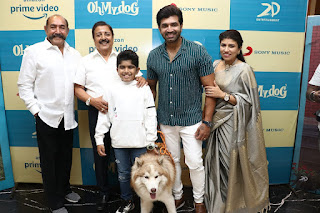 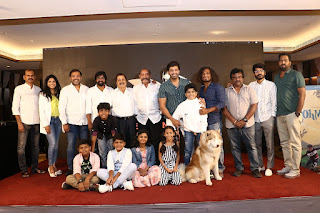 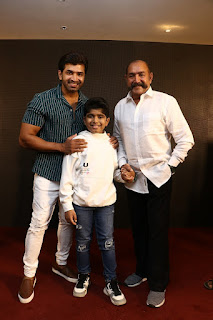 An enthralling production by 2D Entertainment backed by Suriya and Jyothika that has been made on the lines as well as on the quality of a Disney film!

This was exactly the opinion of all those gathered at the exclusive Media-Meet during which occasion, senior actor Vijaykumar, his son Arun Vijay and his son Arnav Vijay which is all set to stream on Amazon Prime from April 21st 2022!

Arun Vijay’s son Arnav is debuting as a child artiste through this flick helmed by Sarov Shanmugham.

The film’s team along with the kids who had acted in the film converged on the dais to elaborate on the film and its making!

The event’s USP was the presence of veteran actor Sivakumar which was further punctuated by his speech that sketched the career graph of his illustrious son Suriya!

Sarov Shanmugham mentioned that the moment he conceived the script meant for children, he was contemplating of whom to approach to back the project and eventually he had met Karpoora Sundarapandian of 2 D Entertainment who instantly liked it and gave the green signal! He also recollects Suriya’s approval as well as appreciation for the script.

He also observed that it was Suriya, after coming across a photograph of Arun Vijay with Arnav suggested that I approach them to act!

Arnav Vijay has performed very well and he is certain to receive recognition at a National level!

100 of dogs have been used for this film and the formalities involved were complied with in full!
A particular dog was shortlisted and it was trained well, given the fact that the film’s theme was set around the love and affection between a small boy and his pet dog!

Yet another noteworthy feature of this flick is the fact that three generations from a family-Vijayakumar, Arun Vijay and Arnav Vijay have acted together!

Real life grandfather, son and grandson have appeared in the same order in this reel life too!

Nivas K.Prasanna who has scored the music for the film expressed his appreciation for this thoughtful project.

Oh My God is certain to make the viewers exclaim, Oh My God, what a film!