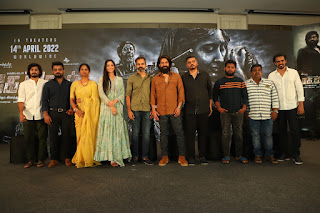 Pan India films being the trend of the times KGF (Chapter 1) was one among the pioneers of that concept produced and promoted from South India, especially from Sandalwood.

Yash the rising star on an All India basis has carved a niche for himself as a swashbuckling actor whose handsome looks and superlative skills while doing stunts came to the forefront catapulting him to stardom not merely in the State of Karnataka, not only in South India but on an All India basis!

Prasanth Neel established his credentials through his directorial flashes while showcasing his ability to make a movie at such levels and at such standards!

This sequel projects the film and its worthwhile content on a very lavish scale as evidenced by the film’s Trailer as well as the song dedicated to Mothers!

The best part of the Press Meet was the fact that though the lead technicians were from the neighbouring State, almost all of them spoke in Tamil much to the consternation of the huge crowd that had gathered!

Hombale Films has bankrolled this project on a mammoth scale that it is certain to be lapped up by the audience on its release on April 14th!

S.R.Prabhu is releasing the film all over Tamilnadu.

In his address, Yash made a specific mention about the need for actors to speak in the languages in which the film is released.

Ashok has penned the Tamil dialogue while Bhuvan Gowda is the cinematographer. Anbarivu –stunt choreography.

Released by- Dream Warrior Pictures all over Tamilnadu.