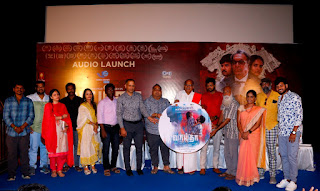 When justice is due to be delivered while the pronouncement of which gets delayed, it is but nothing sort of a sin as the delay in justice being delivered causes distress to those concerned and connected with the verdict!

This analogy forms the base of the narration for Vaitha bankrolled by Varahaswamy Films while Mahivarman has helmed the film. Om Films has acquired the rights to release the film in entire Tamilnadu.

C.Mahindran, one of the frontline personalities Indian Communist Party released the film’s audio on a grand occasion attended by the cast and crew of the film besides other film personalities.

Pugazh Mahindran, son of C.Mahindran, is debuting as the film’s lead man. Professor Mu. Ramasamy has also played a crucial role in the filmwhich has music by C.Lokeswaran. Producer C.V.Kumar was one among the special invitees on the occasion.

K.Vinod Kumar is the producer of this flick the theme of which deals with the aspects of courtroom rituals and formalities while the crux is about the adjournment of the hearing ever so many times regardless of whether the advocates concerned are responsible for that or not!

The film’s Trailer and Songs indicated that on its release the film is certain to create ripples across as the subject matter is delicate and is likely to tickles a sect of people connected with the courtroom proceedings!

Yegaali was the film’s initial title which eventually got changed as the production too underwent a different phase altogether!

The theme of this flick is set round the lives of a particular community involved in washing of clothes and there is also a corollary that gets deliberated in the process!

The film’s release is eagerly awaited!