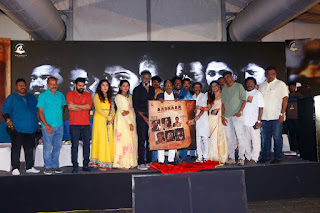 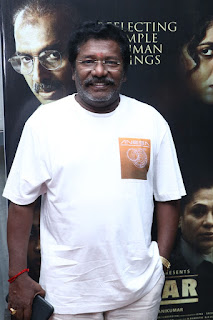 Police brutality has been the central theme of very many films in the past as well as in the present. Kavalthurai Ungal Nanban was one such film that showcased the plight and predicament of a man who became a victim owing to the force of circumstances!

Karunas who has carved a niche for himself as a veteran comedian showcases an unknown side of his emoting to extreme levels in this gripping tale that deliberates on the pathetic position of a simpleton who gets pushed from pillar to post for a peculiar reason!

Dileepan, Rithvika and Arun Pandian are also in the main cast of the film the songs and score of which have been composed by Srikanth Deva.

Veteran filmmaker, Bharathiraja, Ameer and many others from the film fraternity attended the Trailer and Audio Release event held in a moving manner.

A song penned by Eureka and tuned in by Srikanth Deva was screened which all the trappings to emerge as one among the best of the season!

Veteran composer Deva who was also a special invitee on the occasion, advised his son (Srikanth Deva) to compose such melodious numbers which would last long after creating a long lasting impression in the minds of the listeners!

Bharathiraja released the film’s Audio while the other guests received it.

Director Ramnath Pazhanikumar too spoke on the occasion and thanked his team for the film’s outcome!

Karunas the film’s protagonist spoke out from the bottom of his heart and his was a frank outflow!

Mahesh Muthusamy, the film’s cinematographer was also present on the occasion.

Mrs. Sasikumar, the film’s producer narrated as to how the film’s script was conceived and crafted based on a real life happening.

In his address, Bharathiraja mentioned that the film industry is one among the best business opportunities in the world!