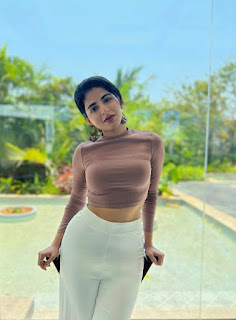 Aiswarya Menon is obviously one of most promising rising stars of South Film World.

It is quite exciting to note that she has signed up three interesting projects in Telugu simultaneously!

It is worthwhile mentioning that she has been associated with Tamil projects such as Thamizh Padam 2, Naan Sirithaal etc.

In a project bankrolled by U V Creations, she is playing opposite Karthikeya (of Valimai fame) besides a film to be helmed by Prashanth. Ed Entertainments’s now project has also brought her up on board opposite Nikhil.

Have carved a niche for herself at Kollywood, she is all set to scorch the screens of Tollywood while she is listening to scripts from Kollywood as well!

A big break for the darling damsel!