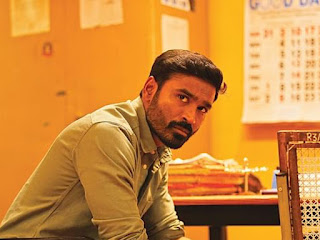 Written and Wielded by- Karthick Naren

With investigative journalism as its base, this action packed, fast pace thriller raises a pertinent point in the climax through the antagonist whose identity remains under tight wraps till then! While investigative journalists walk that extra mile to unearth facts and figures in the process of unmasking those powers that be, the intermediaries who take risks to get the tasks executed not out of power hunger but out of stomach hunger for their own selves and their kith and kin, finally get victimized but their bosses mostly go scot-free!

The screenplay examines one such strange situation wherein a doting dad whose wife had already breathed her last, resorts to take up tasks that are illegal not by choice but out of compulsion to keep his only daughter going! If he gets victimized while the journo exposes the illegal acts, how wrong or how justifiable it is if he ventures to wreck vengeance on the journo is all what the film’s central theme is all about!

Dhanush does his part with customary conviction while Ramki cuts a neat cameo as an investigative journalist. Writers/filmmakers/actors –all rolled into one-both Samudrakani and Ameer (though he makes a belated appearance!) are in their usual elements! The same cannot be said of the others in the cast, the heroine included!

Smruthi Venkat as Dhanush’s sister creates an impact especially in the scene where she chats with her bro about the existence of a lover in her life!

Karthick Naren one of the most promising young talents of the times appears to have faltered in the narration which takes too many twists and turns but without much avail!

The screenplay could have possibly laid more focus on the working styles of investigative journalists without deliberating on emotional aspects which would have made viewing a little more of an enjoyable experience.

Vivekanand Santhosham’s cinematography looks impressive especially the way in which he has canned the final fight sequence.

There is nothing much to write home about the music of G.V.Prakash Kumar.

A well meaning theme that raises a point to be pondered in the climax but the rest of the film looks a bit monotonous!