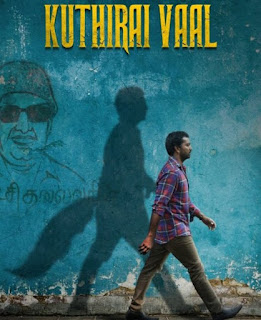 Cinema is casually construed by many of being a source of entertainment only; but there are many discerning filmmakers who look at it from varied perspectives while ventures themes that are away from the normal besides being daringly different! Well, the directorial pair, both of whom are debutantes, have come up with a film that is not only offbeat but would necessitate a different pattern of thinking process from the viewer’s view-point!

Arguably adapted from Franz Kafka’s novel, The Metamorphosis, the screenplay deliberates on the life of the protagonist, Saravanan (a Freud kind of role depicted by Kalaiyarasan with tailor made perfection!) who wakes up one fine morning following a disturbed sleep that left him with a sense of discomfort, only to realize that he a horse’s tail to sport behind his back!

The lens work of Karthik Muthukumar creates a huge impact thanks to all that colourful imagery that transports the audience to a different level!

In his mad run to run behind the reason behind his tail, Saravanan comes across Vaanavil (Anjali Patil, presented as Van Gogh representing Mother Nature as also his neighbour Babu (Chetan).

The film mixes magic with realism and the audience too get confused just like the protagonist and it is a mixed feeling at the close of the proceedings whether one was able travel along with Saravanan in his quest to find out answers for the puzzle!

No doubt, it is a brilliant and bold attempt by the directorial duo but how effective the entire exercise has been is a point to be pondered at length!