A ROBOT ON THE MOVE!

The film’s Trailer was released at a grand function held at a theatre complex during which occasion, a galaxy of film personalities released while the little actor playing a Robot received it! 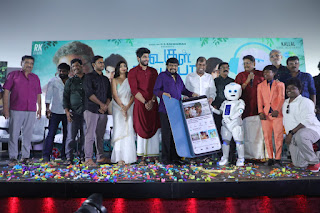 Sabari and Saravanan, erstwhile assistant directors of K.S.Ravikumar have jointly helmed this flick as they share a perfect understanding with each other as well as being friends.

Tharshan, Losliya, Yogi Babu etc have appeared in crucial roles in this flick which has K.S.Ravikumar in a stellar role!

K.S.Ravikumar who turned a producer with Thenali at the suggestion of Kamal Haasan made a mention about his next production venture which would be helmed by a newcomer, Aravind with Kanishka, Vikraman’s son playing the lead.

The official announcement will be out in April, he added.

The directors who spoke on the occasion mentioned a great deal about K.S.Ravikumar’s work so far as a filmmaker as well as his avatar in the recent times as an actor!

K.S.Ravikumar paid respects to his mentor, Vikraman talking about his association with Super Good Films which came by after Vikraman’s Pudhu Vasantham.

Mention was made in detail about the trends of contemporary actors and directors.

The film’s release is much awaited...