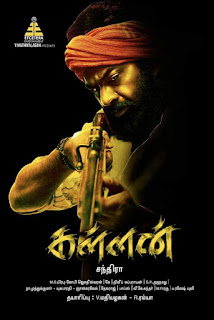 Written and Wielded by- Chandra Thangaraj

Films as U-Turn (Hollywood, 1997) and Sindhanai Sei (Kollywood, 2009) deliberated on themes about the sharing ratio of ill-gotten money and how the people who jointly worked to access it tried outsmarting one another leading to an unexpected climax!

Chandra Thangaraj has come up with a similar theme with a tight script that offers no dull moments at all!

While the viewers will remember Karu Pazhaniappan’s directorial, Parthiban Kanavu with Srikanth and Sneha (in a double role!), he doubles up as an actor here and does his part without a blemish.

Vela Ramamurthi asserts his class in the introductory sequences.

Namo Narayana is in his usual elements as a jailbird!

Velu (Karu Pazhaniappan) and his two friends are small time thieves who frequent the prison on a regular basis.

A fellow prisoner (Namo Narayana) and his friends team up to chalk out a prison-break plan and once that is executed successfully, they plan a heist at a Club House and get away with a huge sum of money.

With the law on their tail, a couple of them get killed and the rest have their own individual plans to own up the loot, fully!

But something else is in store for all of them!

Nikitha as the female lead is just passable.

A female filmmaker coming up with such an action packed thriller with so many twists and turns is indeed a welcome aspect of this flick!