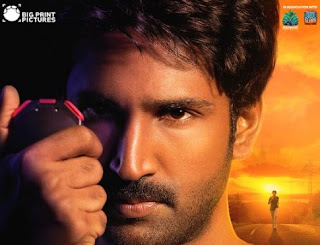 Scripted and Helmed by –Prithivi Adithya

Sports dramas are a rarity these days at Kollywood and here comes one with a powerful script backed by power packed performances that transports the audience to a different world (of sports, of course!), altogether!

His efforts in depicting a sportsman who has lost one leg in a freak accident, wanting to train an innocent, rural belle have been showcased brilliantly on the screen! The pain one has to undergo while sporting an artificial leg to move around and act like any other has been shown in a very realistic manner, especially the mirror-trick and the explanation that Aadhi offers regarding the usage of that mirror!

Prakashraj’s cameo as Aadhi’s doting dad deserves mention and one can only hope that he was given more of screen time.

Aakanshka Singhdoes her part well both as Aadhi’s better half as well as a hockey player but her character appears to have been underwritten! More so, the marital discord between them both hasn’t been convincingly presented.

Krisha Kurup is indeed the film’s USP as plays the role of an aspiring runner to tailor made perfection! She looks every bit of that character that he portrays and deserves a pat on her back for her presence and performance without a fuss! She is certain to go places in the film industry!

For a change, Munishkanth doesn’t go overboard and is effective as a genuine accomplice in Aadhi’s mission.

Ilaiyaraja’s music is another salient feature of this sports drama, especially his background score.

Aadhi is a professional runner, whose life gets titled, owing to a freak accident, leaving him without a leg besides rendering his affectionate father, dead.

Life moves on as his lover insists on marrying him despite his leg issue.

By chance, he stumbles upon a young girl, an aspiring runner from a village backdrop who is forced to give up her interest in sports owing to family circumstances. He takes up her cause and coaches her as the other professional coaches refuse to coach her owing to a specific reason and finally fructifies his dream (as well as hers) making her a National Champion despite several odds!

The scenes and sequences have been meticulously deigned and mounted with conviction making viewing a moving experience!

The assistance offered by a journo to clear the thorny bushes in the paths of Aadhi & Krisha merits mention.