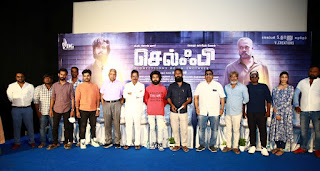 The Press Meet of DG Film Company’s SELFIE was held recently which was punctuated by the presence of film personalities as well as the members of the Media. Based on the merit of the film’s content, the release rights have been acquired by Kalaipuli S.Thanu through his home banner, V Creations.

Mysskin was elaborate in his speech while Vetrimaran spoke what was expected of him.

Subramaniya Shiva too spoke at length.

G.V.Prakash Kumar who plays a crucial role in the film spoke briefly about the film, its content, music as well as his performance in the proceedings.

Filmmaker turned actor, Gautham Vasudev Menon too plays a pivotal role in the film as evidenced by the film’s trailer exhibiting sophistication and style.

Producer Gunanidhi thanked all the guests while mentioning as to how Kalaipuli S.Thanu was instrumental in getting the project on.

The theme is about the commercialization of education and the role enacted by brokers in between who look at it as a money making deal!