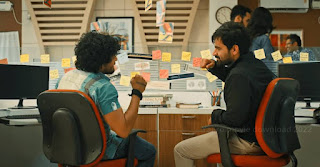 murder mystery laced with suspense that is strong in the scripting department but the same cannot be said of the execution as the unfolding of the screenplay is just about being passable! The music of Jose Franklin is indeed a redeeming feature of this thriller in which Venkat Reddy, the producer as well as the protagonist dominates the proceedings most of the time!

The plot is intricate dealing with illusionary happenings that involves murders too with the first half setting the stage for a whodunit kind of investigation.

Venkat Reddy has obviously put his heart and soul into the character and is convincing enough while depicting his complex characterization. He certainly deserves a pat on his back!

Director Sandeep Sai has executed the script in a breathtaking manner but could have possibly kept a tight leash on the film’s latter half.

The viewers get to understand that this is basically a psycho thriller only in the closing portions which could have been handled better!

In all, an edge of the seat kind of thriller, that has its positive sides.