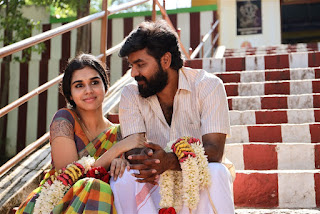 The redeeming feature of this suspense filled flick with lots of action is the background score of Jai as well as the songs which manage to pass muster!

Jai plays Siva, an orphan, who holds a hidden agenda while responding to the love-proposal of Venba (Meenakshi Govindarajan), the daughter of a bigwig, Rathnasamy (Sharath Lohithaswa) always crossing swords with Chelladurai (Jayaprakash), another biggie in the neighborhood. It is merely a matter of ego clashes between them both which turns into a turmoil time and again as both of them look forward for all possible opportunities to square up!

At an opportune moment when Siva gets to meet Rathnasamy, the former springs a surprise rather a shock by slaying Rathnasamy, much to the shock of not only Venba but the audience too! He is facilitated by Solomon (Kali Venkat) for this heinous crime.

The rest of this rural drama describes as to why Siva sought vengeance!

Suseenthiran’s script has a lot of twists and turns no doubt but whether the screenplay holds the attention span of the audience is the question in toe!

After a point, the proceedings turn predictable ensuring that the interest of the audience starts waning slowly but steadily!