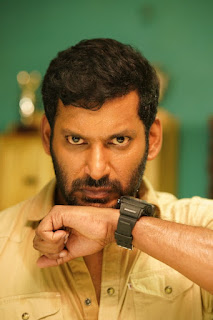 Vishal is all fire right from the first frame excelling in action sequences as always moving at a lightning fast pace! The fight in the bar tops it all with Vishal exhibiting his brand of stunt skills! Brand Vishal! True. He has in fact evolved himself as a brand on the merit of his movements in the action blocks!
Dimple Hayathi looks simple but just about fills the bill without much of an impact!

Yogi babu as Vishal’s close pal is just about adequate.

Thu. Pa. Saravanan, the debutante director has taken up three separate tracks as the story line that blend with the life of an aspiring cop, Porus (Vishal) whose dad (Marimuthu) is also serving the police department. Porus’ mom (Thulasi) is very home-bound while his sister Dwaraka (Raveena Ravi) is a college going lass.

Parisutham (Kumaravel) is a social activist who takes up the cause of the ill-effects of a chemical factory in the neighbourhood that affects the lives of the local community. The factory owner (Baburaj) is a typical baddie read to slice off anyone who hinders his path!

There is another college going girl who is chased by her colleagues who are well connected.

As a case of mistaken identity, Dwaraka who is already being stalled by the brother of a local rowdy gets murdered and soon after Porus gets into action to track the killers!

The rest is obvious.

Both the romantic as well as the comedy tracks fail to create a flutter!

The initial portions move at a leisurely pace but after some unexpected happenings, the proceedings pick up steam and turns into a high velocity action thriller!