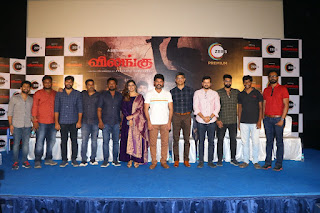 Zee 5 has established its credentials as an affordable OTT Platform that caters to the needs of the viewers by proving quality content applicable to different sect of audience with different kind of expectations! There are separate contents for people of different ages that are clearly demarcated age wise so that there is no ambiguity amidst the viewers regarding the nature of contents that are showcased.

The platform has carved a niche for itself for its original content and web series which have enthralled the audience!

The latest offering on this platform is Vilangu, a web series penned and helmed by Prasanth Pandiaraj. Vemal plays the protagonist in this nail-biting thriller set against a backdrop!  Streaming from February 18th 2022.

Siju Prabhakaran Zee Network spoke on the occasion of a Press Meet held prior to the screening, remarked that their earlier outing, Mudhal Nee Mudivum Nee had garnered tremendous response and likewise, this web series too ls likely to evoke a big response!

Kaushik Narasimhan, VP Content spoke about the depth of Vilangu’s content and how the director has presented it!

Madhan of Escape Arts who has staged a comeback as a producer after a brief exile expressed his appreciation for the making of the web series and also mention actor Bala Saravanan has been projected in a totally different light in the movie!

Bala Saavanan thanked the Media for their unstinted support mentioning that the director of this web series has been a good friend and hence he had asked him to offer him a serious character unlike the role of a comedian that he has been handling most of the time!

Ajeesh, the composer complimented the director for his clarity while explain the scenes revealing what kind of background score, he expected from me!

Director Prasanth spoke about his challenging journey in filmdom and how everything fell in place while this project was conceived and executed by erecting a police station set in Trichi!

Vemal observed in his address that he liked the script very much and got so involved in his character.

Ineya too shared her sentiments while addressing the Media.

The web series has seven episodes and could be categorized in the genre of an investigative crime series.

Each episode moves at a steady pace and as the screenplay unfolds the viewers are treated to a sumptuous feast in the thriller genre!