Pa. Ranjith has certainly travelled long way since his debut film, Attakathi. Having directed super star Rajnikanth in two films back to back, he has also carved a niche for himself as a discerning filmmaker by backing projects that were handled by discerning filmmakers who took off to a brilliant start in the industry soon after the release of those films!

His home banner, Neelam Productions has reserved a special slot for itself in the film industry by bankrolling worthwhile projects which were acclaimed both critically and commercially!

Collaborating with Yazhi banner, Neelam Productions has come up with a film that carries an 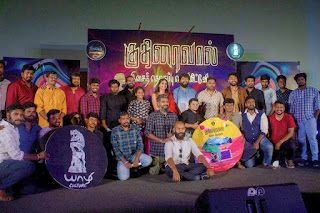 Manoj Leonel Jahson and Shyam Sundar have jointly helmed this film based on the script of G.Rajesh Kumar who has also assumed responsibility for the screenplay and dialogue.

The film has Kalaiyarasan, Anjali Patil & Sowmya Jaganmurthy in the lead roles.

Karthik Muthukumar has cranked the camera while Pradeep Kumar is the composer.

The main cast and crew of the film spoke their heart on the occasion of the film’s Audio Launch while the main focus of all of those who spoke were centred round the strong script!

The connectivity between fantasy and reality is the crux of this film, it is inferred.

It was quite evident that film will stand out on the merit of its success and would score brilliantly both commercially and critically!