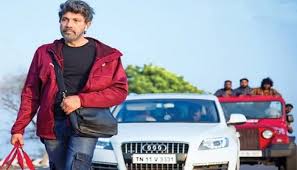 Written and Directed by –Dheeran

The title is a misnomer! Neither the theme nor the happenings bear any semblance or significance to the title!
As a matter of fact, the protagonist takes the law into his own hands and goes about delivering his own verdict!

The weather-beaten plot is about the spree of vengeance which initiates action in the life of a senior citizen Dr. Nalan Kumar (Sathyaraj ) his daughter, Bharathi (Smruthi Venkat) being the apple of his eye!

All hell breaks loose when she gets caught in the web of a spoiled brat who is the son of a powerful business tycoon, Rudra (Madhusudan Rao).

Nalan who is unable to bear what happened to Bharathi rises in revolt but carefully and cautiously plans his revenge!

Initially, Rudra underestimates Nalan who has the former’s son under his arms and keeps issuing instructions laying down some tough tasks!

Sathyaraj holds the fortress well and Madhusudan Rao too keeps up his pace with him!

A routine tale of revenge but the execution manages to sustain the interest of the audience to a reasonable extent.