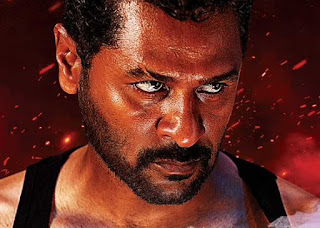 As acknowledged in the title, this dance choreographer turned actor turned filmmaker Harikumar’s debut directorial is a reasonably good adaptation of Kim Ki-duk's Pieta (Korean, 2012) which was hailed as a classic!

In V.Shantharam’s Do Ankhen Baarah Haath, a Jailor would resort to a novel method to reform 6 convicts all of whom were rated dangerous! Likewise, here, a mom who lost her son to the highhandedness of a henchman, resorts to an unexpected methodology to wreck vengeance on him!

The screenplay takes its own time to establish the principal characters and once that is done, the film picks up pace and moves about steadily.

Prabhu Deva plays Durai a henchman to a loan shark who funds vendors at the market and defaulters are handled very cruel manner. Durai is the one who does the ‘honours’ to the defaulters!
Thilaka (Samyukta Hegde) tries to pair up with Prabhu Deva and makes all kinds of moves in that direction. Outcome? Not only Prabhu Deva but the audience too get irritated!

Given the fact that we have two seasoned dance choreographers on board, it is pathetic to see that poorly choreographed dance number (looks more like an item number!) canned on the heroine! A definite distraction marring the flow of the narration!

Out of the blue lands up a middle aged lady (Eswari Rao) claiming to be Durai’s mom! Having being orphaned since long, Durai only shows anger and not affection at her!

But as the narration unfolds, a twist in the tale creeps in that gives a jolt not only to Durai but also to the viewers!