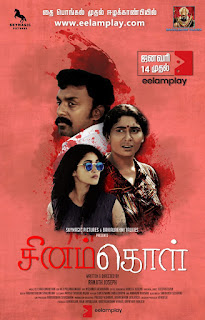 Written and Wielded by – Ranjith Joseph

Several movies have so far been made on the issues of Thamizh Eelam deliberating on the extent to which innocent lives were lost, people were rendered homeless and families getting separated.

Here is a gripping tale on a similar subject that focuses on the scenario post the War and the impact it had cast on several people in that neighbourhood!

Amudhan (Aravindhan Sivagnanam) returns to his native place after having been imprisoned for 8 years! At the time he was put behind the bars, his wife, Anandhi (Narvini Terry) was carrying and the little female child is now eight years old. Anandhi is now working as a labourer and manages to eke out a living!

The first half focuses on the receptivity of people when Amudhan returns and the efforts that he puts in to know the whereabouts of his wife while he still remains in the dark regarding his child!

The scenes of the family’s reunion have been brought out in a very emotional manner.

The second half delves into the efforts of Amudhan now a car driver who inadvertently gets caught in an act of kidnapping involving the daughter of a rich man who had migrated abroad looking for greener pastures!

The film’s latter half takes a dramatic turn as it is punctuated by cinematic twists and turns while Amudhan gets into action with a resolve to restore the kidnapped girl.