Poshpa -The Rise- Part 1-on OTT 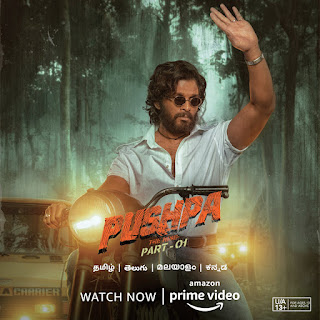 The blockbuster entertainer is currently streaming on Prime Video in Telugu, Tamil, Malayalam and Kannada. The film will launch in Hindi starting 14th January on the streaming service

Action thrillers strike a chord with the audiences, owing to their gripping and intense storylines, next level performances and of course stunt sequences. However, once in a while comes a movie like Pushpa: The Rise-Part 1, which changes the very perspective of what you think is an out an out blockbuster and mass entertainer. Considering the number of reels being made by fans, to its songs and iconic dialogues, it’s safe to say that one certainly has been living under a rock if they haven’t heard about this movie yet and for whatsoever reason, if you have missed it, it is available to watch in Telugu, Tamil, Malayalam and Kannada on Prime Video. The film will premiere in Hindi on 14 January.

5 Reasons to watch it ASAP:

Pushpa…Pushpa Raj: Yes, the most important reason to watch this movie is Allu Arjun himself. A lot has been spoken about this versatile and supremely talented actor but with Pushpa: The Rise, Allu Arjun has taken the bar of method-acting several notches higher. Fans cannot get over his performance, dance moves and action stunts and of course his unique style and mannerisms- every single time he runs his hand across his beard.  Thanks to him, the movie is well and truly a blockbuster.

Chatter crossing boundaries: Pushpa: The Rise has become a national and international phenomenon. It has transcended the boundaries of regional cinema by marking a strong presence across movie enthusiasts across the spectrum. From receiving critical applause from celebrities, critics and audiences who can’t stop raving about how brilliant the movie is, Pushpa: The Rise can safely be termed as the most popular entertainer of the year, and it is now available exclusively on Prime Video for a global audience.

AA and FaFa- Together!: Here is a quick question, what happens when two of the most brilliant and spectacular actors of their time share screen? The answer is - pure magic. And that is what we got to see in this movie as the two stars Allu Arjun and Fahadh Fassil leave us in awe of their charisma and screen presence. We all should fear Bhanwar Singh Shekhawat, we really should! For those who couldn’t get enough of Fahadh Fassil’s brief role in the movie, fear not, because there will be a sequel to Pushpa: The Rise and Fahadh’s storyline will continue from where it left off. By the way, this film also marks FaFa’s debut in Telugu cinema.

The Direction: Once you hit the play button, till you see the end credits, you will not feel like hitting the pause button even once. And that’s all thanks to the director Sukumar who’s created a gripping watch that will have you intrigued right from the word go. Sukumar has created a benchmark for action films with Pushpa: The Rise- Part 1

An audio-visual delight:  The combination of 10,000 watt dialogues coupled with the breathtakingly beautiful locations, catchy songs and unmatched acting by the cast will leave you only with one

Question: When is part 2 releasing?

It is not possible to do justice to this movie’s magnificence with few words, but it is a major miss if one has not watched it yet. Pushpa: The Rise- Part 1 is streaming exclusively on Amazon Prime Video, Tamil, Telugu, Malayalam and Kannada. It will launch in Hindi on 14 January, so block your dates and savour this mega-entertainer over the weekend