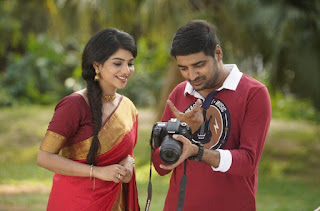 Written and Helmed by –Kishore Rajkumar

Humorist Sathish has graduated to the status of the main protagonist here the light hearted theme is a sci-fi fantasy and there is a note of caution at the start of titles rolling that the objective is to provide fun and not to bother much about logic!

True. The film is a full length entertainer with Sekar (Sathish) employed in a contemporary IT world stumbles upon a dog which bites him!

This incident leads him to a failing scientist (George) who has been debarred by the powers that be for continuous and consistent failures!

He was in fact experimenting with the DNA switch of a dog, Padayappa (Shiva, voice courtesy!) and inadvertently yet unfortunately, the switch takes place between Sekar and Padayappa!

Debutante Pavithra Lakshmi as Pooja is a good selection for the part of Sekar’s colleague.

Manobala, Sreeman, Livingston etc provide good fun time and again but the pick of the lot is Ganesh of the Shankar-Ganesh musical duo of the past appears as a musically comical villain, humming tunes, time & again!

Kishore Rajkumar has laid his full focus on the humour content; had he focussed a little more on the screenplay, the film would have been much more enjoyable!

Sathish deserves a pat on his back for his uninhibited performance!