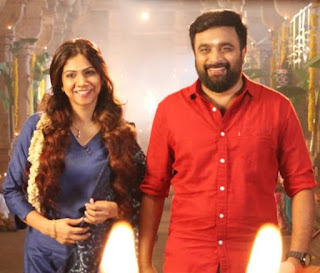 Written and Directed by S.R.Prabhakaran

Looks like Sasikumar is following a specific template while playing the lead in such rural dramas with a big family to showcase! There are so many characters around in one frame, all belonging to a single family and it is a challenge indeed to come to terms with all of them!

Soori is supposed to provide comic relief and he is successful only in bits and parts!

N.K.Ekambaram’s cinematography is a salient feature of this routine rural drama as he has captured the lovely locales tastefully.

Sri Priyanka scores better in a cameo as a suitor to Sasikumar’s hand while Madonna looks out of place in the rural milieu! Even the romantic interludes between them fail to generate any impact!

Harish Peradi is getting type cast and no definite role play in the proceedings though a big built-up is given to his character!

The identity of the real brain the bad happenings in that village comes up as a surprise but then the style of the presentation of that character reminds the viewers of Sundarpandian, the director’s earlier outing!

Director J.Mahendran clad in white dhoti and shirt with matching while sandals asserts his class!

A time pass that moves at a steady pace right through.

Samudrakani makes a cameo appearance at the start of the movie but to no great avail!