Scripted and Helmed by –A. Hariharan

An interesting premise plotted and executed effectively by A.Hariharan who has come up with a very good narration as well. The three prime characters in the movie play the prefect pivot and the breezy romance is an interesting watch! Had the running time been pruned a bit as it appears a tad too long, the film would have sizzled better!

The texture rich visuals of Richard M.Nathan and the scintillating score of Vivek and Mervin warrant definite mention.

Ashwin Kumar Lakshmikanthan who has been graduated to a main player here has shouldered the responsibility with effortless ease and looks handsome his wardrobe adding some extra flavour to his colour and complexion!

Teju looks ravishing and has come up with a cute performance.

Avanthika fills the bill adequately but it is Teju who proves a scene-stealer!

It is an arranged marriage for Vikram (Ashwin Kumar Lakshmikanthan) an RJ at a Radio Station and Anjali (Avanthika Mishra) a specialist in love based books and the arrangements for their engagement is underway.

Anjali probes Vikram for a tip off on his love-experiences and without winking a bit, Vikram bluffs that he was connected with a girl earlier in his life!

When Anjali insists on meeting his previous love Vikram gets into a fix but lands up finding a lass, Preethi (Teju Ashwini), a theatre artist as a quick fix solution to ‘play’ his ex-girl friend with a counter condition that he too should pose as her boyfriend before her grandfather (Delhi Ganesh).

Things move on smoothly between the three of them but at a point, the acquaintance between Vikram and Preethi takes a turn and these portions have been very nicely handled!

How the triangular puzzle gets sorted out is the lengthy rest.

The comedy track involving Pugazh and Swaminathan is just passable. 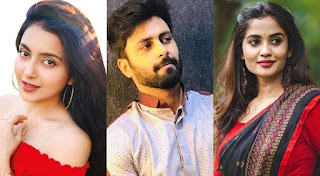